Many Belgian Symbolist artists invoke ancient myths and legends to heighten the mysticism, drama, and nostalgia of their art. Rops frequently incorporates antique imagery in his prints, featuring several recurring motifs that allude to the arts of antiquity. These include:

Satyrs: Hybrid creatures with the head and torso of a human and the legs of either a horse (in Greek mythology) or a goat (Roman). Satyrs are associated with Dionysus, the Greek god of wine, and symbolize festivity, excess, drunkenness, sexuality, fertility, and lust.

Sculptural relief: Stone carvings that are only partially raised, creating a flatter sculptural form. Reliefs were commonly executed by the ancient Greeks.

Herms: Sculptures whose form—a square pillar base and the head or bust of a human figure—originated in Ancient Greece.

Greek and Roman goddesses and gods: Personnages such as Aphrodite/Venus, Hermes/Mercury, Zeus/Jupiter, Terminus, Athena/Minerva, and Pegasus, appear in many of Rops’s prints, as do words written in the Greek alphabet.

Unlike artists of antiquity, Rops does not idealize his figures. He portrays instead the individuality of his working-class models and places contemporary concerns in tension with ancient motifs. Recognizing the influence of the sociopolitical environment on his mythographic representations, Rops writes:

“I’m beginning a mythology composed of: The mythology of Rops. One must belong to the times, after all! My Venus is called Mariette Tutu and she lives at 16, Rue des Martyrs! That’s how I understand the Gods and religions! You have to screw all that and do what you like.”1

Through his allusions to antiquity, Rops demonstrates a foundational understanding of mythology and the classics. While such associations enrich visual readings, Rops’s prevailing priority remains to depict themes relevant to and understood by nineteenth-century audiences. 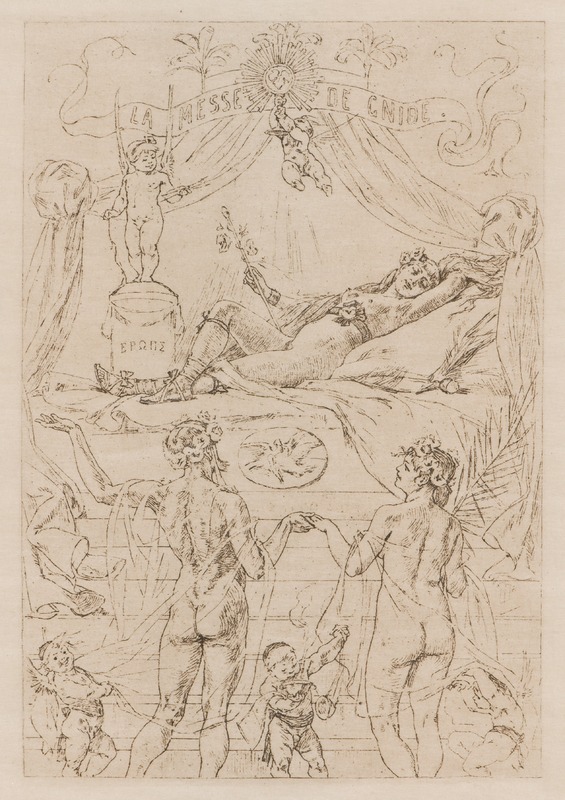 In its final state, this image was published as the frontispiece to an 1881 edition of Charles Montesquieu’s prose poem Le Temple de Gnide (originally published in 1725). The text, posing as an ancient Greek poem in translation, celebrates the triumph of virtuous affection over carnal desire.

Rops playfully juxtaposes symbols of Catholicism, decorum, and immodesty in this work, which depicts Venus presiding over a wedding mass. Cupid assists, brandishing his arrows atop a plinth that reads ΈΡΩΠΣ, or EROPS (a clever amalgamation, I believe, of “Eros” and “Rops”). The nude bride holds a palm, a Christian symbol of the spirit’s triumph over the body, while a central putto raises a monstrance that bears a fig leaf, an icon of modesty, instead of the consecrated Host. Two doves—birds associated with Venus—mate in the circular stone relief, and the bottom-center putto investigates the incense emanating from an opened thurible. 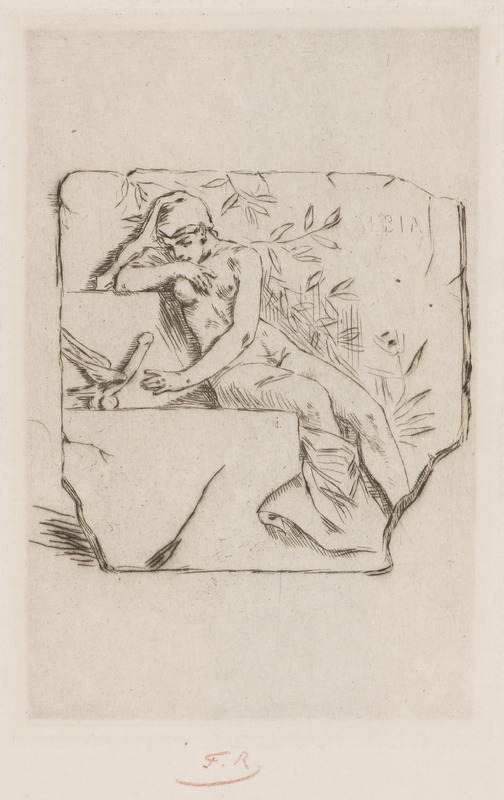 The subject of this print derives from the work of Roman poet (circa the first century BCE) Catullus, who composed several poems about Lesbia, the woman he loved, fondly playing with her pet sparrow (le moineau in French). Rops transmutes the sparrow into male genitalia, visually punning on the word that, in ancient Greece, applied to both bird and sexual organs.2 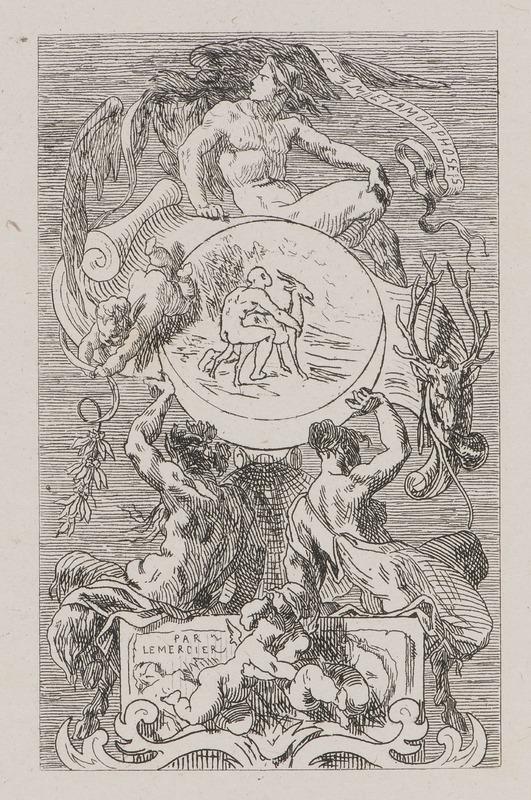 Mercury, the Roman messenger god identifiable by his winged hat, or petasos, sits above a medallion supported by a satyr and satyress. He faces a large eagle, which, given the theme of the print, is likely an animal incarnation of the supreme god Jupiter. This work served as the frontispiece for a nineteenth-century edition of Les quatres métamorphoses (originally published in 1799) by Louis-Jean-Népomucène Lemercier, a collection of four poems dedicated to Diana, Bacchus, Jupiter, and Vulcan that enumerates various seductions involving a dozen other goddesses and gods.

Both frontispiece and poems allude to Ovid’s Metamorphoses (circa the first century C.E.), a foundational textual source for Western cultures. Ovid records myths of the Roman deities, many of which feature copulation between mortals and gods disguised as animals, a narrative characteristic referenced by the subject of the central medallion in Rops’s print. 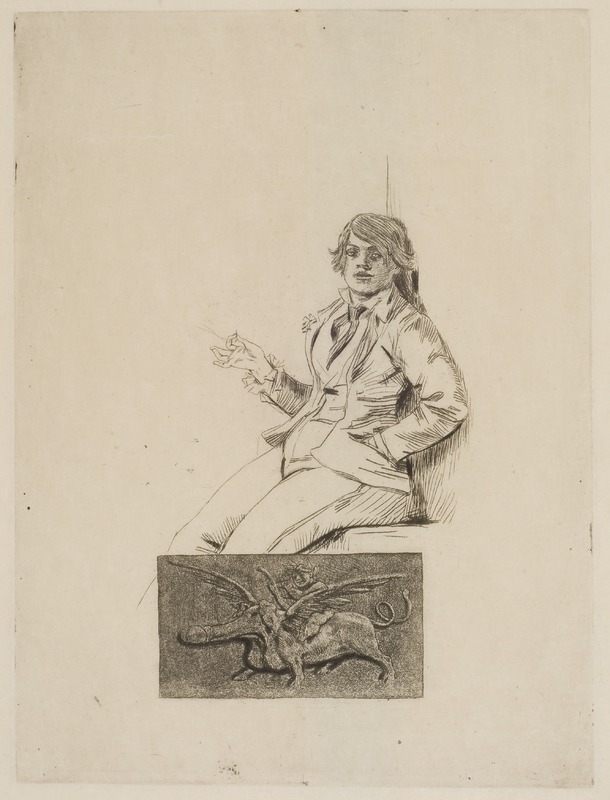 This Parisian urchin (as indicated by the French gavroche) smokes a cigarette and confidently returns viewers’ gazes. Rops dresses her in men's clothing, identifying her—in a superficial manner sufficient for his time—as a lesbian, a figure evocative of fin-de-siècle obsessions with sexuality and distrust of women.

Rops juxtaposes this contemporary image with a stone relief depicting an Apollo-like putto—the attributes of laurel crown and lyre refer to the Roman god of poetry and music—riding a winged pig. Rops has transfigured the winged horse Pegasus, an ancient Greek and Roman symbol of poetry, into this animal associated with luxury, greed, and indulgent sexuality. 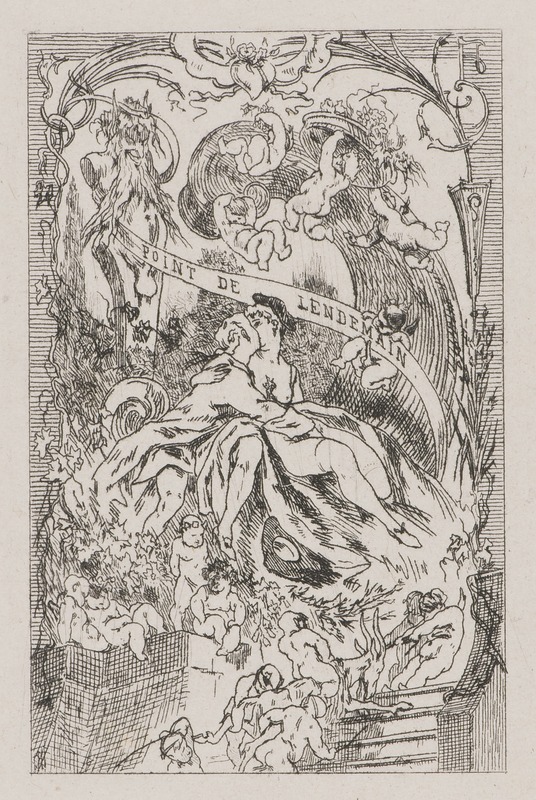 Printed as the frontispiece for the 1867 edition of Dominique Vivant Denon’s novella Point de lendemain (originally published in 1777), Rops’s etching captures the libertine spirit of the text. Denon’s female protagonist manipulates and balances affairs with several young men at once, an amorous theme visually expressed in the activities of the embracing couple, the aggressively erect penises of both the statue and the putto holding the banderole, and the general festive excess exhibited by putti brandishing a platter of fruit and hauling in a goat for slaughter.

The herm features the Roman god Terminus, protector of boundaries. Ancient families would delineate their territories with stone markers and honor Terminus with offers of produce and animal sacrifices.3 In this work Rops reverses expectations: Terminus grins down at the lovers’ indecorous display as they transgress societal and sexual boundaries. 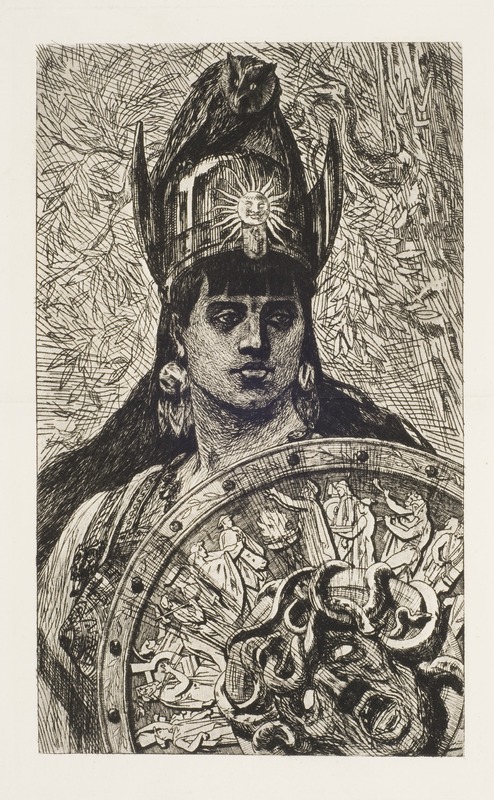 Pallas is a common epithet for the Greek goddess of wisdom and war, Athena. Rops depicts her dressed for battle in a helmet and armor, brandishing her gorgon-head shield. She is surrounded by several other attributes such as the owl, signifying sagacity, and the olive tree.

The “WL” in the upper-right-hand corner stands for William Lesly, one of Rops’s pseudonyms (others include Vriel and Nemrod).4 In 1869 Rops founded the Société international des aquafortistes and, eager to legitimate his claim of internationality, he invented this British printmaker to list among the society’s members;5 note the “London” etched below the tree branch. 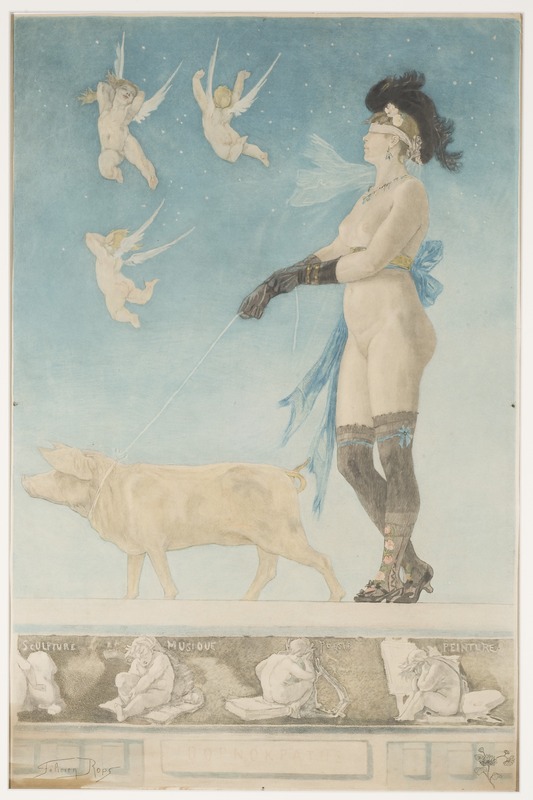 One of Rops’s most famous works, Pornokratès recalls antique iconography through its winged putti and a stone relief that invokes the ancient arts of sculpture, music, poetry, and painting.

The term “pornocracy” (pornocratie in French, pornokratès in Greek), defined generally as a government ruled by prostitutes,6 alludes specifically to a period of tenth-century Papal history known as Saeculum obscurum (The Dark Age), during which Rome fell to the rule of a series of unqualified, corrupt popes who governed by greed and lust.

Rops associates this woman with Roman mythology through her cestus, or golden girdle, a classical attribute of the goddess of love, Venus, that is first described by Homer in the Iliad and often depicted in Western art. The cestus enhances the wearer’s powers of seduction and, as Venus is credited with the invention of prostitution,7 the belt’s presence signifies both this woman’s social position and, more broadly, the fascination of fin-de-siècle artists with themes of sexual liberation. 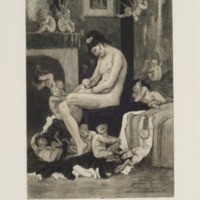 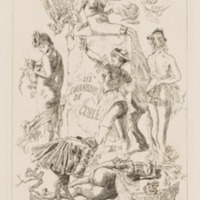 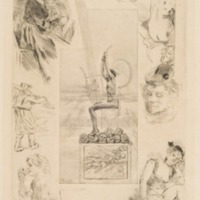 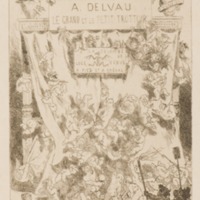 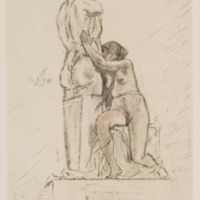 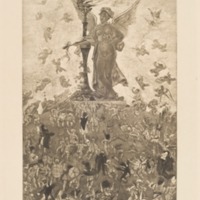 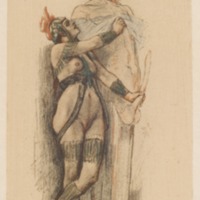 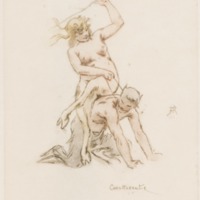