Interview conducted by H.R. Blakeley on January 8, 2016, at the Musée Félicien Rops in Namur, Belgium

Véronique Carpiaux, curator of the Musée Félicien Rops since 2006, has worked there since 1997. The museum was founded in 1964 and moved to its current location in a building on Rue Fumal in 1967, undergoing an expansion and modernization in 2003. Every year the museum mounts two or three temporary exhibitions, treating subjects with connections to the nineteenth century and to Félicien Rops, as well as publishing written works on Rops or related topics. Children, students, and adults participate in educational programs and activities such as conferences and concerts, promoting an active life for the museum.

Q.1: How did you become interested in Rops as an artist?

Ms. Carpiaux wrote her undergraduate thesis on Christian Dotremont, a contemporary Belgian painter and poet. Through this project she had the opportunity to study Dotrement’s letters, and when Ms. Carpiaux arrived at the Musée Félicien Rops, she began by researching Rops’s letters and archives. One project led to another, and in 1998 she worked on a large-scale event commemorating the centennial of Rops’s death. Over the past twenty years the museum has expanded or inaugurated several projects, such as the website ropslettres.be, an internet collection of Rops’s letters that includes a scan of each letter in the museum’s archives with an accompanying transcription. This public-facing digital resource offers access to Rops’s letters to scholars, students, and the general public, and is crucial for a more comprehensive understanding of Rops as both a plastic and literary artist.

Q.2: What are some prevalent themes in Rops's work?

The Musée Félicien Rops presents the progression of the artist’s life as well as the development of themes in his work. People are most familiar with Rops as an erotic, satanic artist, due to his frequent representations of woman’s union with Satan, but the museum exhibits many other aspects of his work, as well. Rops produced early caricatures in the style of Honoré Daumier and Paul Gavarni, for example, mocking the bourgeoisie, politicians, and prominent artists of the time. Prints such as La peine de mort and La grève demonstrate his anti-death-penalty stance and his engagement with the politics of his day. Rops’s work also exhibits traits of Realism in the style of Gustave Courbet, an important master for Rops.

One of the most significant events in Rops’s artistic life was his move from Belgium to Paris, where he discovered the fascinating life of the boulevards, with their cafés and theatres, as well as the excitement of new social and professional networks. In Paris Rops recorded the difficulties of women’s lives in prints of local prostitutes and alcoholics.

The museum also treats the theme of Symbolism; Rops was one of the first major Symbolist artists in Belgium, creating works such as the Dames au pantin series, in which we witness woman’s manipulation of man. As a result of his passion for travel, themes of landscape and voyage are also significant in Rops’s oeuvre. He visited places such as Hungary and Spain and spent time in New York, where the two sisters he lived with planned to open a couture house—they ran a well-known house in Paris—to capitalize on the popularity of Parisian fashions in America.

Another section of the museum is devoted to literature. Rops completed numerous illustrations, beginning with those for Charles Baudelaire, the best-known French poet of his time. One room in the museum is dedicated to eroticism, which is the aspect of Rops’s body of work people are most familiar with. But we see in addition to the eroticism a sense of humor in the art, even when Rops is evoking sexuality. 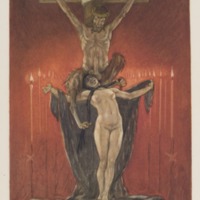 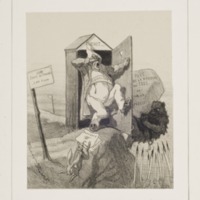 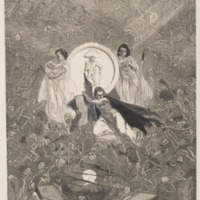 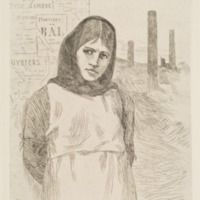 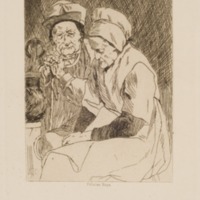 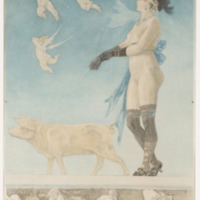 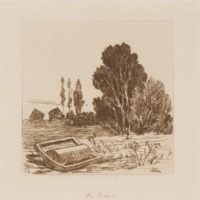 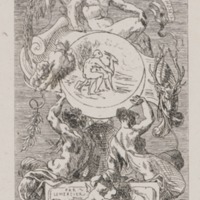 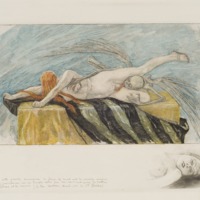 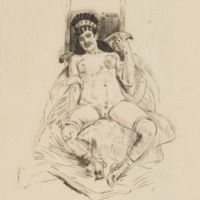 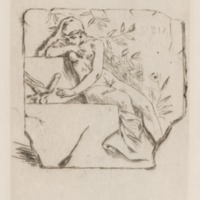 Q.3: What do you find most compelling about Rops's work?

Ms. Carpiaux appreciates that Rops tried to avoid hypocrisy in his life and work. He was quite close to his contemporaries and depicted the difficulties of life for certain groups of people. Rops mocked the bourgeoisie, but did so with an ambiguous edge, as he was also a member of the bourgeoisie. Through some areas of his work he pokes fun at his own social class, his own contemporaries.

Another remarkable aspect of Rops’s art is that the works of his youth, like those of his maturity, maintain a consistent quality. Often we observe that artists—even well-known Belgian Symbolist artists—have one very important, striking period in their careers, and in ageing, unfortunately, their styles can change for the worse. But when we look at Rops’s drawings from the very beginning of his career, when he was already immersed in eroticism and provocative art, we see that he was also continuing to produce Realist works (such as women gathering weeds, bundles of sticks, or wood). Over the course of his life he maintained this same quality of drawing.

Ms. Carpiaux finds it impressive for an artist to began his career with caricature, to end with a difficult series like Les Sataniques, and in between to sustain the same graphic excellence. 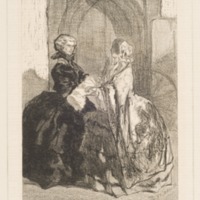 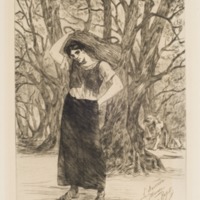 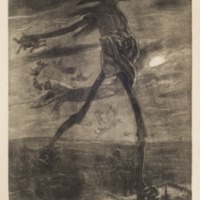 Q.4: How would you characterize Rops's attitudes about women, as evidenced by his work?

Some visitors to the museum are taken aback by or question the relationship of Rops to women, wondering, Was he someone who misunderstood women, or was misogynistic? Ms. Carpiaux’s opinion is that Rops genuinely loved women. We know that he was a great seducer, had an enormous number of mistresses, and left his wife and family to live with two sisters—the sisters Duluc—who owned a fashion house. Rops had an idiosyncratic way of life and always accepted himself. He had a motto, “Rops suis, aultre ne veulx estre,” which roughly translates to, “I am Rops and do not want to be another.” He did not want to change anything in his life; he wanted to continue living according to his passions.

Rops also depicts women in a Realist way: we see the absinthe drinker, the prostitutes, the misery of women trying to survive in the nineteenth century who had to prostitute themselves to pay for their glass of absinthe. This is a historical moment when absinthe seriously damaged the health of many men and women. Rops is sensitive to all of this and speaks about it in his letters, saying [paraphrasing], “I saw my neighbor again, she’s lugging her kids around in her arms, she had a black eye, her husband beat her.”

Rops was concerned about the fate of women, but he was also a product of his time. He was immersed in fin-de-siècle literature of authors such as Joséphin Péladan and Jules Barbey d’Aurevilly, who depict women as messengers of the devil. Rops provided illustrations for these authors, and he makes his own connections between woman and evil.

Nor should we forget that syphilis, as well as other maladies transmitted through prostitution, was also very present during this time. Rops sometimes depicts prostitutes or dancing skeletons dressed in women’s clothing, displaying attributes of femininity but revealing ultimately that these seductions and attractive feminine charms are masking, unfortunately, death. This is the link between eros and thanatos that Rops raises in the connections he establishes between woman and Satan.

For Ms. Carpiaux, this more literary vision of women—imprinted from the context of fin-de-siècle decadence—prevails, as does Rops’s sincere interest in the condition of women in his Realist works. 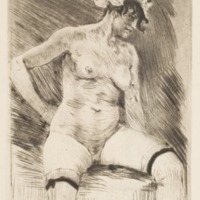 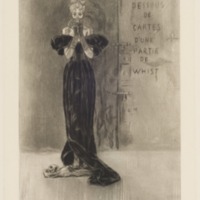 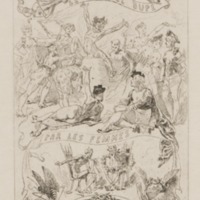 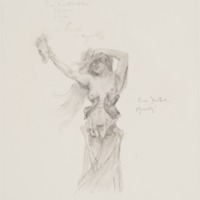 Q.5: How is Rops relevant and important in modern-day contexts?

Ms. Carpiaux finds the nineteenth century remarkable for its similarities with our contemporary period. By researching the nineteenth century we can observe that people lived with many of the same questions and concerns that affect the population today, such as those regarding technology and medical research.

Rops would sometimes write three letters a day at three different moments, almost like the sending of emails now. The post was very developed, and there was an enormous variety of news sources, so people could choose to follow journals that aligned most with their preferred discourse.

Many methods of transportation also debuted in the 1800s, such as the train, boat, and car. Rops would know the telegram and the beginning of the telephone. This was a period when—like now—people could take photographs at any moment during the day, although nineteenth-century equipment was obviously less advanced, as cameras were heavy and photographs were made on glass plates. With the advent of photography a new mentality developed for engravers, who feared artistic rivalry.

Medical research exploded at this time, as well, with Charles Darwin’s theories of evolution and the beginnings of psychiatry with Jean-Martin Charcot, who studied female hysteria in Paris. Women’s and feminist movements also developed during this period, which we can see in Gavarni’s Les Lorettes, his depictions of independent, liberated women. Prostitution and sexually transmitted diseases were also rampant in the nineteenth century, creating concerns similar to those we have faced recently with HIV/AIDS. Rops was surrounded by all of these kinds of questions and problems.

The Industrial Revolution pushed some artists to retire to the countryside; Rops said he liked to travel above all because he could escape the Parisian boulevards. Cities such as Paris and Brussels were already megalopolises, and nineteenth-century artists would talk about the frenzy of modern life: trams, commercial shops, street lamps illuminating the night, lighted galleries with large windows, colored posters such as those by Jules Chéret, etc. The ambience changed during the 1800s, and people found themselves in the midst of upheaval and change. At the end of the century, many questions arose about what the next century would bring, similar to reactions that occurred during the transition to the year 2000. 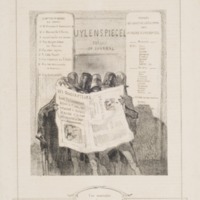 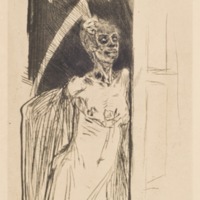 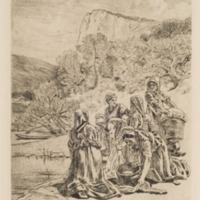